The Grasshopper is an innovative vaporizer created by a small group of engineers that wanted to bring something new to the industry. Powerhouse vaporizers tend to be large and bulky, and the smallest vaporizers don’t compare in terms of vapor production. With the invention of the Grasshopper, these engineers aimed to provide vape enthusiasts with the best of both worlds. They made a power-oriented vaporizer in the size and shape of a pen. The Grasshopper is an extremely portable, discreet vaporizer with power never seen in such a small form factor.

The Grasshopper was made with performance in mind, and what you can do with such a small device is truly mind-blowing. It does everything the makers promised it would do. It effortlessly fills bags with vapor, which is a great party trick. The look on people’s faces when they see it for the first time is priceless. This isn’t the first time a vaporizer has done this. Many come with bags, and a lot of vapor stores sell them as accessories. This is, however, the first time we’ve seen such an accomplishment from something so small.

The rubber tip that comes with the unit protects the user’s lips from heat, and it’s totally necessary. This device gets quite hot if you’re chain-vaping, but that’s its only drawback. Considering what it does with so little space while utilizing a predominantly metal design, this didn’t come as a surprise. The rubber tip in conjunction with the unit’s cone-shaped tip allows you to pair the grasshopper with water pipes.

It’s one of the best vaporizers to use with water pipes. It competes with much larger vaporizers in this aspect, and I was deeply impressed by what I saw. The Grasshopper boasts a heat-up time of 5 seconds, which is ridiculous for any vaporizer, much more so for a vaporizer the size of a pen.

As much as I want to give the performance a 10, I had to knock off a couple of points for the heat issue. It was advertised as a stealth vaporizer that looks like a pen. It looks a lot less like a pen with the rubber mouthpiece, and it’s nearly impossible to use without it. 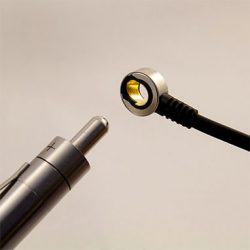 There are a few variants of the Grasshopper with different color schemes and materials. The titanium variant looks slightly more premium than the stainless steel variant, but their base design is the same. It feels extremely durable in the hand, and it looks exactly like a pen in your front pocket. It even has a satisfying pen-like click when you turn it on.

Below the on/off clicker at the top of the pen is the temperature dial. It rotates effortlessly and speaks to the overall quality of the unit. There aren’t numbers indicating the temperature on the dial, but I can understand that from a design perspective. It’s especially irrelevant when you consider the fact that once you find your sweet spot, you won’t be changing it that often. Even if you do change it constantly, it doesn’t take very long to pick up on what each setting feels like.

Adding to the overall quality of the Grasshopper is its magnetic charger. It’s quite strong, and there’s something very satisfying about the way it snaps into place with ease. The ring of LED lights near the tip of the pen manages to look modern and industrial at the same time. All things considered, this is an extremely attractive device. It’s right up there with the pax in terms of aesthetic appeal, although it feels significantly more robust.

This device is so easy to use that someone with absolutely no vaping experience could pick it up and use it without an instruction manual. To turn the Grasshopper on, simply click it like you would with a pen. Upon hearing that satisfying click you’ll notice the LED lights turn red. It should go from red to blue within a few seconds, and this signals that the pen is ready to use. At this point, you can simply pull from the device, and you’ll get a plentiful amount vapor.

The temperature control dial couldn’t be easier to use. Turn it to the right to increase the temperature, and turn it left to decrease the temperature. The grasshopper works incredibly well, and a lot of thought clearly went into the user interface. The herb chamber could be easier to load, but it isn’t extremely hard. It’s just so small that a loading tool would’ve been appreciated. It’s a bit annoying, but it’s far from difficult. This is a minor flaw, and everything else about the Grasshopper is incredibly user-friendly. \

The Grasshopper was designed for stealth and power. It seems as though they wanted to pack as much power as they could into the smallest possible form factor, and they went above and beyond our wildest expectations. This is unlike any other pen-style vaporizer due to the fact that it is exactly the size of a real pen.

The Grasshopper consists of three main parts: the mouthpiece, the middle piece containing the battery and herb chamber, and the cap with the temperature dial and on/off button.  Upon taking this vaporizer apart, you’ll notice something strange. These parts fit closely together in order to keep a low profile, and the battery takes up the majority of the device.

As a tech enthusiast, my first question was “where are they storing the chipset?” The only place to store this, as far as I can tell, is between the herb chamber and battery. There’s only half an inch between the herb chamber and battery, and the rest of the unit is occupied. This device defies the laws of physics, and I’m still not quite sure how they managed to pack so much into such a small device. It’s a feat of engineering, and we applaud this incredible design.

Maintaining the grasshopper couldn’t be easier. It requires almost nothing from the user. If the mouthpiece gets too dirty it can be rinsed out or dropped into some isopropyl alcohol, and the herb chamber can easily be cleaned out with a scraping tool. That’s all there is to it. There’s nothing whatsoever to complain about in terms of the grasshopper’s maintenance.

When it comes to enthusiast products, prices tend to skyrocket. The Grasshopper definitely qualifies as an enthusiast product. It takes the concept of the vaporizer itself to a new extreme. The good people at Hopper Labs could’ve charged whatever they wanted for this device, but they landed at the fairly reasonable price of $225 for the base model. That’s a steep price for a lot of people, but consider the fact that it comes with a lifetime warranty. $225 is nothing for a lifelong vaporizer. Spending $225 and never having to buy and herb vape again is a lot better than spending $100 on a vaporizer every couple of years.

The grasshopper easily gets an A in our book. It gets a little warm around the mouthpiece after several consecutive hits, but they provide a solution to that problem. This is, after all, a small, metal device with a built-in oven. There’s no getting around the fact that there will be heat. Still, Hopper Labs managed to make this device not only usable but enjoyable. We love the Grasshopper, and we patiently await Hopper Lab’s next vaporizer.

Check out the list of the best pen-style vaporizers if you want to see more vaporizers like Grasshopper.

Have you tried the grasshopper? Do you want one? Write a review or explore buying options at the Grasshopper product page.

Phil Thomas is a content creator from Pensacola Florida. Not only is he a long-time member of the vape nation, but he’s an artist with a lot of passion. He writes for vape sites and pop culture sites because of his love for those topics, but he writes graphic novels and music to satisfy a real need for creativity without boundaries. He has a mind for both creative and technical writing, and he needs an outlet for both on a daily basis. According to Phil, “Everyone finds their balance eventually. This is just my balance.” In addition, Phil enjoys building computers, messing with Android software, and taking in as much art as he can (especially from talented newcomers.)