Here we’ll be talking about two on-demand, convection vaporizers that are very similar on the surface. They are, however, geared towards two different users.

First, there’s the Firefly 2. The first Firefly was a convection-style vaporizer renowned for its pure, flavorful vapor. Convection vaporizers use hot air to vaporize their respective materials, while conduction vaporizers do so by means of direct heat.

Its successor, the Firefly 2, takes what everyone loved about the original unit and ushers it into the modern era with a sleeker, lighter, and more efficient model. The Firefly 2 is intended for use with dry herb and concentrates. 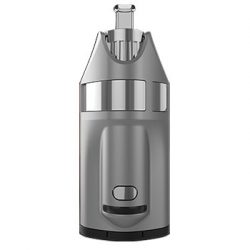 The Ghost MV1, like the Firefly 2, is an on-demand, convection vaporizer intended for use with dry herb and concentrates. It’s clear that this unit was designed for power-users with high standards.

Its vapor production, vapor quality, and vapor potency are cutting-edge for a portable vaporizer.

Its design isn’t as refined as that of the Firefly 2, and to many, it won’t be as aesthetically appealing. It makes up for this with sheer performance.

but where does that leave the Firefly 2…

How much better is the vapor quality of the Ghost MV1?

How much more refined is the design of the Firefly 2?

These are both great vaporizers with similar specifications, but there are key differences that will cause different users to lean more towards one than the other.

Let’s jump into all the pros, all the cons, and all the differences…

In terms of performance, the Ghost MV1 takes the gold. It’s very versatile due to its five preset temperatures, and the flavor from every preset is fantastic. It isn’t the most efficient vaporizer, but it provides very potent hits. Efficiency is a trade-off many power users make. Realistically, it would be impossible to have extremely potent hits without vaporizing more herb. A bowl in the MV1 doesn’t last as long as some, but the short time is time well-spent.

On the other hand…

That 8 degrees could very easily contribute to the Ghost MV1’s superior vapor production, and its larger form factor is another likely contributor.

With very similar flavor but superior vapor production, the Ghost MV1 is the better vaporizer in terms of performance.

The vapor quality of both devices is simply superb.

Both are using high-quality materials that won’t noticeably alter the flavor of the vapor. That being said, the Ghost MV1 has an edge in terms of quality. Despite the fact that the vapor quality from both devices is pretty hard to improve upon, the MV1’s vapor production tips the scale.

Firing both of these vaporizers on their highest settings will produce plentiful amounts of premium vapor, but the MV1 will produce more with almost no loss in flavor. It’s an impressive feat, to say the least.

The Firefly 2 doesn’t lack in flavor. In fact, it’s one of the best portable herb vaporizers on the market for its superb flavor.

On the same temperature settings, it would be hard to say that either the Firefly 2 or Ghost MV1 is better than the other.

The Ghost MV1’s higher temperature will provide more of that flavorful vapor.

In terms of quality, the Ghost MV1 wins the gold. It offers voluminous amounts of top-notch vapor, and that’s all you can really ask for from a premium vaporizer like this. 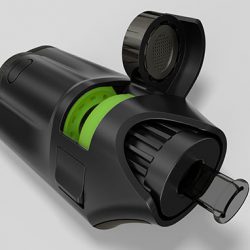 The Ghost MV1 and Firefly 2 are extremely straightforward devices to use, but the Firefly 2 just couldn’t be easier.

It’s easy to fill due to its removable faceplate, and the app makes changing the temperature settings a breeze. Its single-button interface makes it virtually impossible to make a mistake.

Additionally, the temperature of the Firefly 2 is controlled via a Smartphone app. This makes adjusting the temperature easy while maintaining a minimalist and clean design.

The MV1 isn’t hard to use, but it isn’t as easy to use as the Firefly 2. Loading the bowl can be a rather difficult process in comparison. To select a temperature you’ll need to memorize and execute a series of button presses. An app would have made using it a lot easier, but it’s not the end of the world. It’s still relatively easy to use, but next to the Firefly 2 it can seem convoluted. Luckily, both units vaporize herb very evenly, so stirring the bowl is typically not necessary. The difference between the two units in this category is very minimal, but the Firefly 2 is the easier vaporizer to use. The MV1 is still rather easy to use, and it’s unlikely that this small problem will turn many buyers away.

In conclusion, the MV1 is a very easy vaporizer to use, but the Firefly 2 manages to be even easier to operate with the inclusion of an app and an intuitive design.

The winner is: Firefly 2 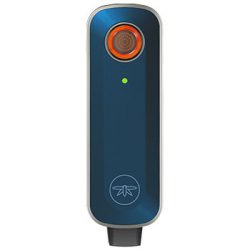 The designs of both the Ghost MV1 and Firefly 2 are top-notch, but they shine in different ways.

The Ghost MV1 feels like something from a sci-fi movie. It looks futuristic, it’s heavy, and it’s well-built. The design isn’t as refined as it could be.

The bowl that slides inside the unit can be a bit finicky and difficult to set up at first. It works fine, and it’s easy to do once you’ve done it several times. Generally, this is a very well-designed vaporizer, but the herb-loading process could be improved upon. The Ghost MV1 features a single-button interface that relies on a series of button presses to navigate the temperature settings. The same button is used to fire the vaporizer when vaping.

The Firefly 2 is similar to the Ghost MV1 in a lot of ways, but their designs are nearly polar opposites. Contradicting the MV1’s loud design and flashy aesthetics, the Firefly 2 sports a very minimalist, classy look. Its subtle yet intricate design is very low-profile compared to that of the MV1, and its physically smaller size makes it a much more discreet vaporizer. The Firefly 2’s single-button interface is easier to use than the single-button interface on the Ghost MV1 due to the fact that it relies on an intuitive smartphone app for temperature control.

The Firefly 2’s design will be more appealing to the eye for the vast majority of users. The focus of the MV1 was kept on performance, while the Firefly 2 was clearly made to be more of a fashion statement.

The MV1 is by no means an ugly vaporizer, but the design of the Firefly 2 evidently had a lot of thought put into it.

Therefore, in the design department, the clear winner is the Firefly 2.

The winner is: FireFly 2

The Ghost MV1 is a very easy vaporizer to clean. All of the parts that come in contact with materials being vaporized are removable, and they can be wiped off or soaked with isopropyl alcohol. That’s really all there is to it.

Cleaning the MV1 is a pretty hassle-free experience.

The Firefly 2 is just as simple as it gets in terms of maintenance. The bowl isn’t removable like the MV1’s, but cleaning it is as simple as wiping it down with isopropyl alcohol and a paper towel. The removable face plate makes accessing the herb chamber as easy as possible.

The Firefly 2 is slightly easier to maintain than the MV1, but neither units will be annoying to clean.

The winner is: Firefly 2

These units are both fairly expensive for portable herb vaporizers, which is understandable. After all, these are top-of-the-line vaporizers.

It’s interesting that the superior vapor quality of the MV1 can be obtained at a lower price, but the Firefly 2’s slightly higher price is understandable. The Firefly 2’s premium design and additional features are likely the reason for its price. If the prices were exactly the same, we’d have a tie. However, the MV1 is less expensive, and it performs slightly better.

The Firefly 2’s superior build quality does justify an increase in price, but the MV1’s value just barely surpasses that of the Firefly 2. 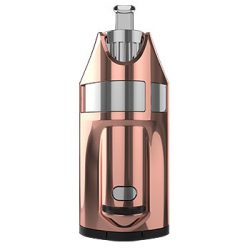 Both of these vaporizers are specialty devices, which means that each does something specific extremely well.

The MV1’s specialty, for instance, is power.

It’s just a varied as you’d want a high-end device to be. It has multiple temperature settings, and it vaporizes multiple materials. In those areas, it matches other high-end vaporizers on the market pretty evenly. Its power and vapor production, however, is nearly unparalleled. The Mighty and Crafty might give it a run for its money, but no other portable vaporizer on the market even comes close.

On the other hand,

The Firefly 2 specializes in being a premium vaporizer.

It isn’t that the MV1 isn’t premium, because it absolutely is. The Firefly 2 just surpasses it. You could even call the Firefly 2 a luxury device. The effortless user interface, the efficient design, the sleek aesthetic, and the Smartphone app put it over the top in terms of luxury. It’s a cutting-edge device, and it couldn’t be prettier.

The Ghost MV1 and Firefly 2 are both great vaporizers, and you can’t go wrong with either.

If vapor quality and vapor production are your bottom line, the MV1 wins hands down.

If you’re more interested in features and aesthetic appeal, the Firefly 2 will likely better suit your taste.

This is a very close battle, but, all things considered, we’re naming the Ghost MV1 champ. Its performance alone is reason enough for praise, but its lower price tips the scale even further in the MV1’s favor.

There are a few other vaporizers like the Ghost MV1 and Firefly 2 worth looking into. For a wider range of portable vaporizers, take a look at our list of the best portable vaporizers. If you’re leaning more towards the vapor production and vapor quality of the Ghost MV1, The Mighty is a vaporizer you’d probably love. Its performance is neck-and-neck with that of the Ghost MV1, and it’s made by Storz and Bickel who famously brought the Volcano vaporizer to the market. It’s a reputable brand, and their devices have a lifetime warranty. You really can’t go wrong getting one.

If the low-profile, luxury design of the Firefly 2 appeals to you more, check out the Pax 3. It has an app as well, but it’s loaded with even more features and customization. It’s also constructed with high quality materials, and its design is one of the sexiest on the market. If the Pax 3 doesn’t quite do it for you, check out the Davinci IQ. It’s one of the most advanced low-profile vaporizers to maintain an extremely attractive design.

Vaping has taken the world by storm. With the rapid development of this new technology, millions of people are switching to this healthier, more economic method of smoking. It’s clear that this movement is here to stay and we’re committed to being right at the forefront of it.